College basketball's favorite month of the year is back, and we have all the info you need to follow your team all the way to the 'ship.

The Big Dance is almost upon us! The NCAA Division I Men’s Basketball Tournament kicks off on March 13th with Selection Sunday, and fans across the country are already scooping up tickets in hopes that their team will prevail on The Road to the Final Four. Whether you majored in bracketology or make your picks based on whose mascot would win in a fistfight, it's a month of crazy fun competition that even the most casual basketball fan can get behind.

But while you're intricately researching and planning ahead for your best bracket ever, you might want to hold off on grabbing tickets and save yourself some cash. After all, it's called madness for a reason — and there are bound to be upsets and underdogs that not only surprise us all but also impact ticket prices from coast to coast. When a favorite gets suddenly knocked out, your wallet will be glad you waited.

Hoping to live out your college hoop dreams? In this guide, we’re breaking down everything you need to know about how do March Madness tickets work: 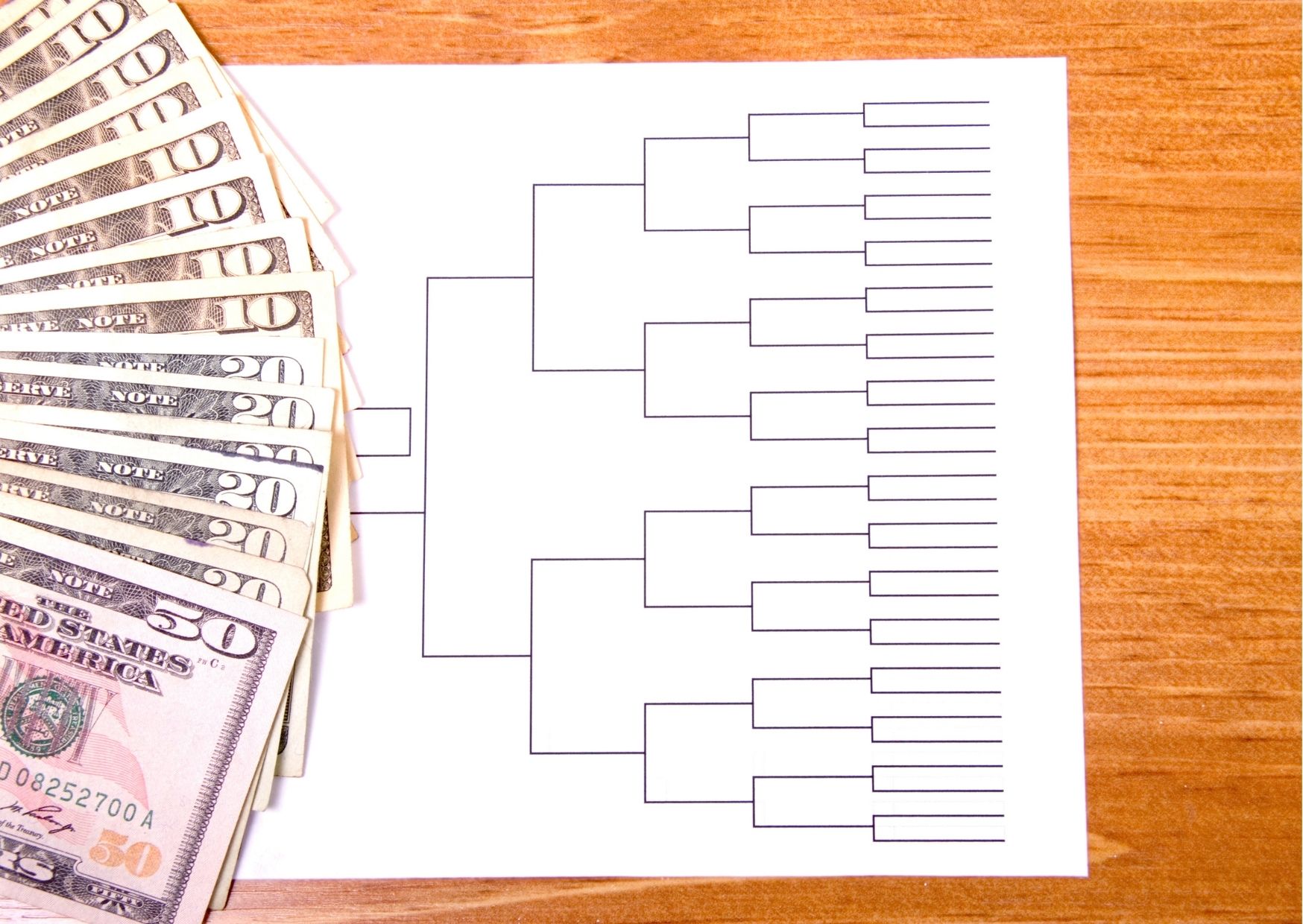 Before we dive into the different ticket types, let's understand how March Madness tickets work. March Madness tickets are as unique as the tournament itself, with a handful of options to get into the game. While you can purchase directly from the NCAA, all tickets sold through their website include the "Official NCAA Experience," a hospitality upgrade that includes private lounge access, food, and drink. If you don't want to fork over the extra cash for VIP add-ons, you can still purchase tickets to any round of the tournament from a trusted reseller like Gametime. Just don't jump the gun too early — ticket prices are likely to fluctuate based on which teams progress through the tournament, so we recommend waiting until the last minute to grab your tickets.

The competition kicks off with Selection Sunday on March 13th, when a special committee announces the 68 teams that will play in the tournament. With 67 games happening over the following three weeks, the schedule is tight and the madness is real. Want to get in on the action? Check out the full March Madness schedule and locations below.

When to Buy March Madness Tickets

If you're a college basketball fan, you're probably wondering how to get cheap March Madness tickets. But it's not just about where you buy tickets — your timing is important, too. As with any other big game, NCAA ticket prices tend to drop as each match-up approaches. Keep in mind that the Big Dance is a single-elimination, one-and-done tournament, and you'll still be on the hook for your tickets even if your team is knocked out in the first round. We recommend that you wait until later in the tournament to get your March Madness or Final Four tickets, so you can be sure you're pumped about the match-up.

With that said, in the case of tournaments like March Madness, ticket prices fluctuate significantly as teams are eliminated and unexpected upsets happen. If you see a price you're comfortable paying (no matter which teams are playing), grab tickets now to avoid surprises.

Tracking prices in the Gametime app? We recommend enabling All-In Pricing to view total costs including taxes and fees. Simply tap “My Tickets” in the app, click on your profile info at the top, and toggle All-In Pricing under Settings. By turning on this feature, you’ll see the full cost of tickets as you scroll through the app. (Note: you’ll need to create a Gametime account in order to adjust these settings.)

Why Buy from Gametime?

If you're heading south for the Final Four, be prepared for a full weekend of festivities. The semifinals are scheduled to go down on April 2nd, while the grand finale takes place on April 4th. There will be plenty of action happening between games, though, so plan accordingly and take advantage of all that's going on. From live music to rowdy tailgates, the city will be abuzz with basketball fans, families, and yes – an abundance of college students embracing the "madness."

Youth ages 18 and under are encouraged to join this basketball parade through downtown New Orleans. On Sunday, April 3 at 3 p.m., fans of all ages will dribble from Mississippi River Heritage Park in this free, family-friendly event.

From Friday, April 1 to Monday, April 4, enjoy the Men’s Final Four Fan Fest at the Convention Center. The cost is $10 per person, but Capital One cardholders, Men's Final Four ticket holders, and kids under 12 are free. Enjoy a sports wonderland of interactive games, special celebrity and athlete appearances, autograph signings, and much more.

Check out each of the Men's Final Four teams in their final open practice on Friday, April 1. This free event at the Caesars Superdome will feature entertainment, giveaways, and activities.

Party before the games on April 1, 2, and 4 in Champions Square right outside of the Superdome. Fans can enjoy entertainment and activities, and it’s free and open to the public.

From Friday, April 1 to Sunday, April 3, enjoy performances from an all-star lineup at New Orleans’ Woldenberg Riverfront Park. The lineup will be announced soon.

* All times are local (EST). All events, times, and locations are subject to change.

The 2022 March Madness Final Four and Championship will take place in New Orleans, Louisiana – home of the Pelicans, Jazz, and Mardi Gras. This sprawling metropolitan city boasts mild winters, an easy-to-navigate public transit system, and countless greasy spoons. The makings for a perfect NCAA Tournament host city. Fortunately, the city is no stranger to marquee sporting events. New Orleans has hosted the Super Bowl 11 times, as well as the Zurich Classic and horse racing at the Fair Grounds Race Course. 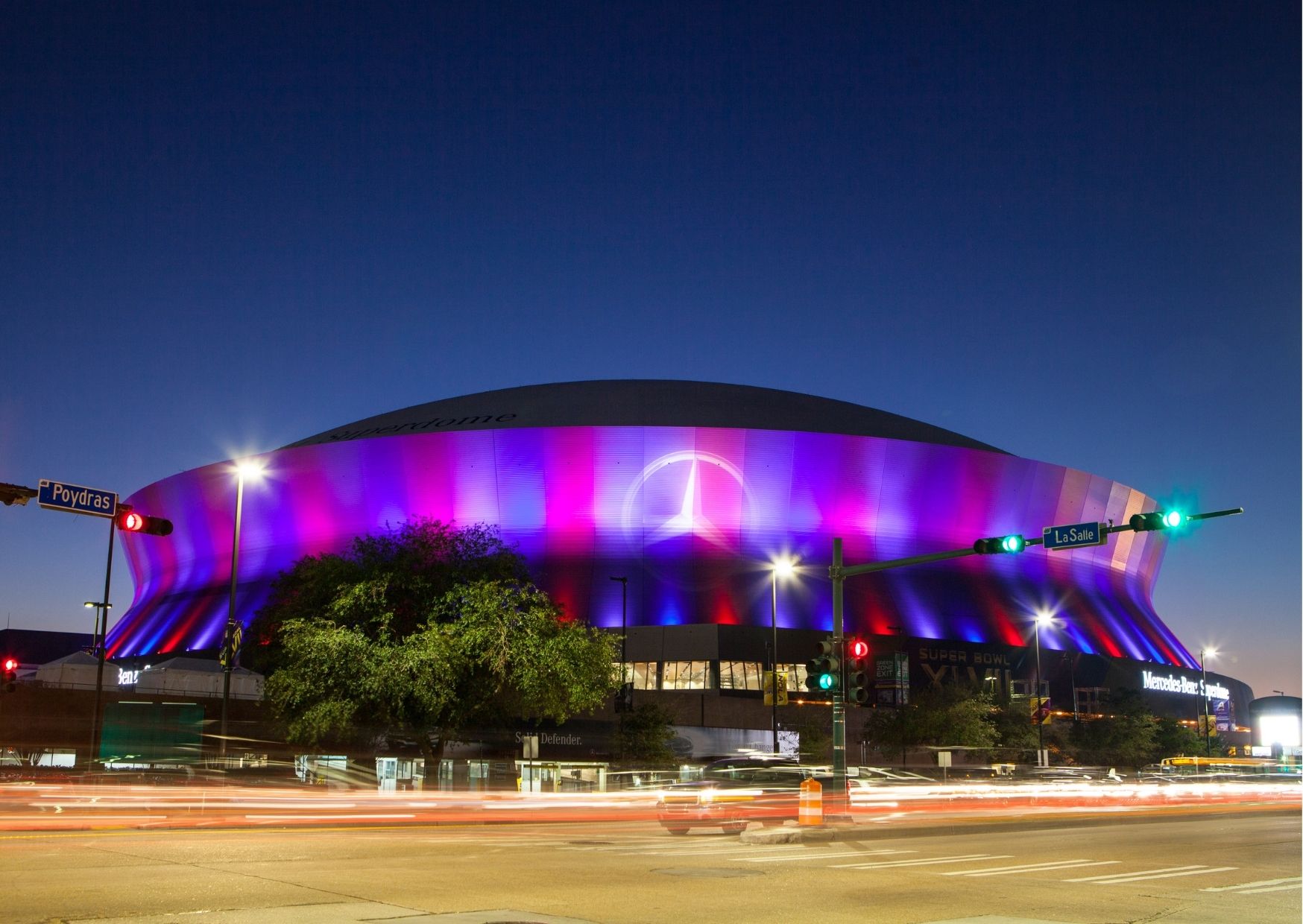 The Final Four and National Championship games will be held at Caesars Superdome in the central business district of New Orleans. This iconic stadium routinely hosts major sporting events, such as the Super Bowl, the Sugar Bowl, NCAA Championships, concerts, and much more. Seating just over 73,000 people, the stadium acts as home turf for the New Orleans Saints of the NFL.

The state-of-the-art facility features a 273-foot dome made of a lamellar multi-ringed frame, making it the largest fixed domed structure in the world.  As for the food, the venue’s dining and beverage options are pretty great! Besides the typical hotdog and pizza options, fans at Caesars Superdome can gorge on alligator po’-boys, fries topped with roast beef “debris,” beer-can chicken bowls, and Cubano sandwiches.

Among the dining options available, fan favorites include:

Take our advice and book your hotel ASAP – if they haven’t already, hotels near the stadium will most certainly sell out. Heads up that somg of the hotels are requiring a 4-night minimum during Final Four weekend. So, make the most of the weekend and stay the whole time (you might not have a choice!)

Impromptu trip? Nice moves. Check out the HotelTonight app for the best chance at snagging a last-minute hotel deal in the New Orleans area. Visitors can also rent an apartment or home on websites like Airbnb. 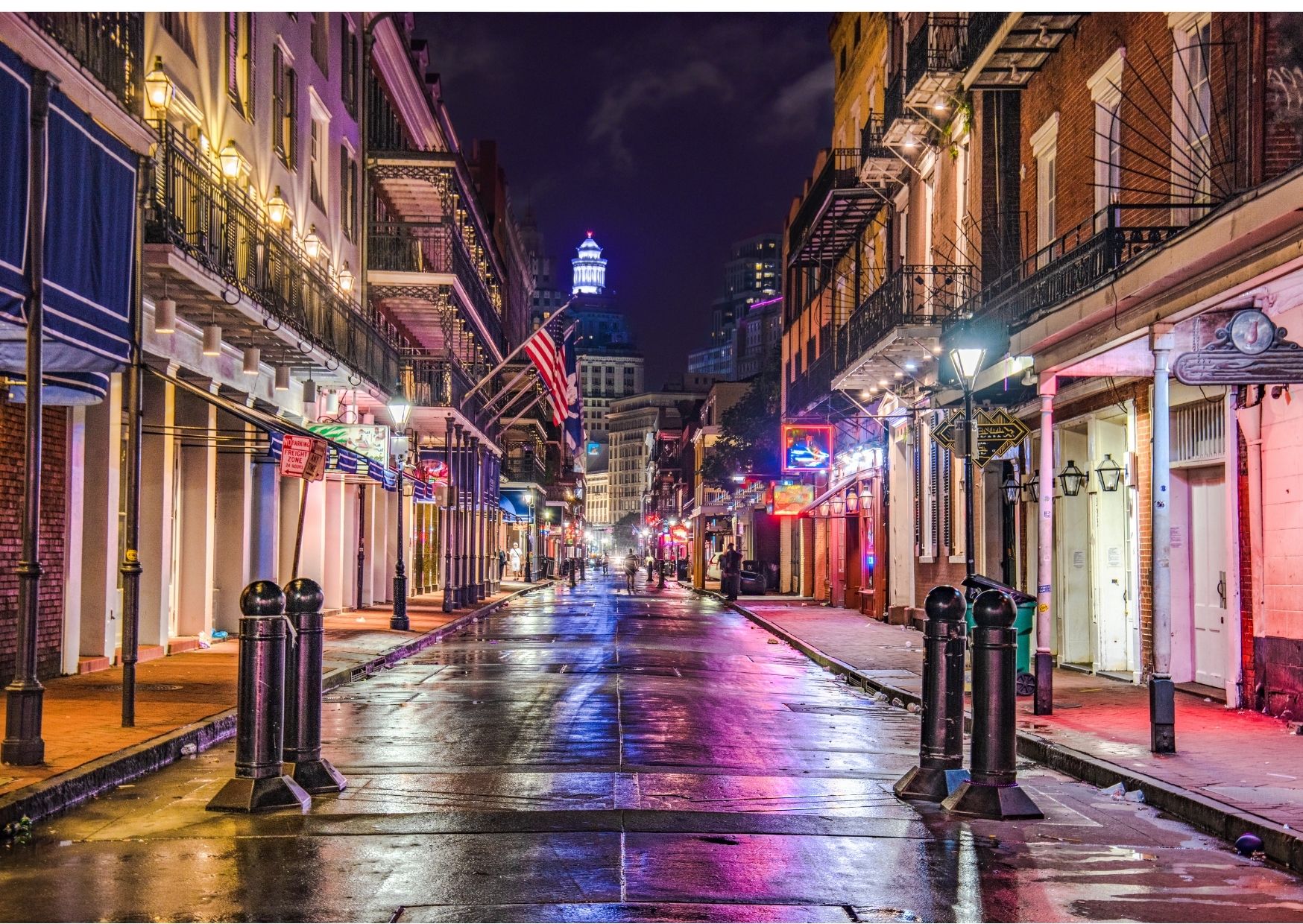 Getting Around New Orleans

Located in the heart of downtown New Orleans, Caesars Superdome is easily accessible whether you plan to walk, drive, or ride. For directions, parking passes, and public transit routes, visit the stadium website. Here are the easiest ways to get to the games: 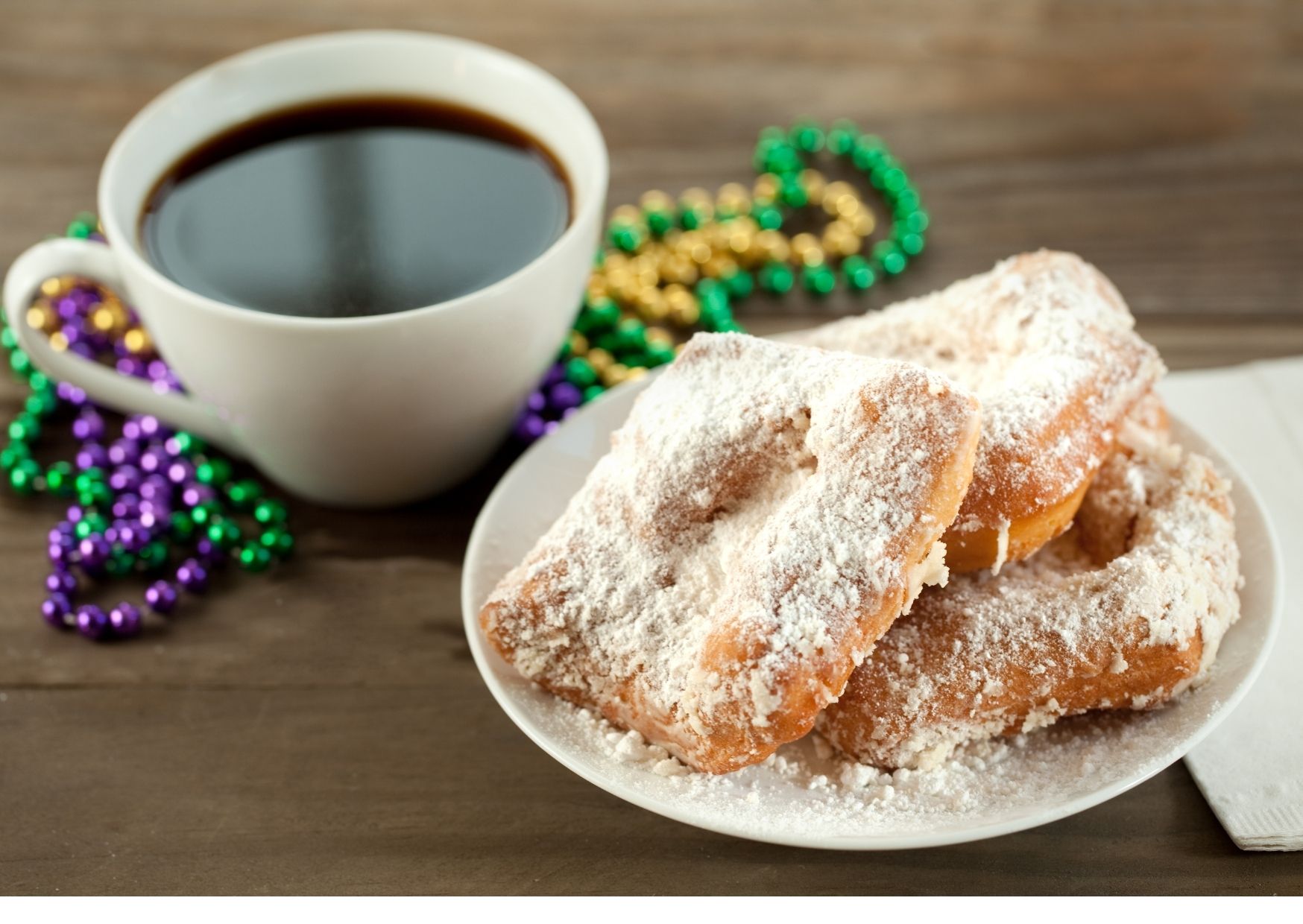 While you’re in town for some basketball, you might as well check out the city’s incredible restaurant scene. Below a couple of our top recs. Let’s be clear that this list is not at all comprehensive, and there are so 👏 many 👏 spots 👏 in New Orleans to indulge your food and drink snobbery. These are a good places to start:

have questions about How do March Madness tickets work or Final Four tickets? Shoot us an email at feedback@gametime.co and we’ll touch base with an answer as soon as possible.