The good news for the NBA this season is that the league has left the bubble and is back to playing games inside the home team’s arena. The bad news is that not every team has approved the presence of fans for the 2020-21 season, and no arena is anywhere close to full capacity. However, the Houston Rockets are one of the lucky teams that are welcoming fans for home games. Rockets tickets are being made available for roughly 20% of the seats in the Toyota Center, allowing for roughly 3,600 fans per game.

With the Rockets being one of the most successful teams in the Western Conference over the last decade, one would assume that those 3,600 tickets per game would be in high demand and rather expensive. But that was before the Rockets made the bold move of trading away disgruntled star James Harden. While they got a nice return in the trade for Harden, trading him was a clear sign that the Rockets are more focused on the future than the present, changing the outlook for the rest of 2021. With that in mind, it’s worth taking a look at whether Rockets’ ticket prices might be impacted by Harden being traded.

First, it’s important to look back at the growth of the Rockets during Harden’s time in Houston. In October 2012, Harden was traded from the Thunder to the Rockets after an agreement on a long-term contract couldn’t be reached. In Houston, Harden blossomed from the reigning NBA Sixth Man of the Year in 2012 to a bonafide all-star, being selected to the Western Conference All-Star Team in all eight of his seasons with the Rockets.

Meanwhile, Houston’s success mirrored Harden’s success. The Rockets missed the playoffs in three straight seasons before Harden’s arrival but made the postseason every year with Harden, including two trips to the Western Conference Finals. In fact, Houston’s streak of eight straight playoff appearances is the longest active streak in the NBA. While the Rockets had plenty of other great players during that time, Harden was undoubtedly the catalyst for the team’s turnaround.

Naturally, winning created more interest in the Rockets, which led to higher ticket prices. During the 2012-13 season, Harden’s first in Houston when the Rockets snuck into the playoffs as the no. 8 seed, the average ticket price for a game in Houston was $95. That number nearly doubled during Harden’s tenure, climbing as high as $180. Of course, team success was an important part of the equation. However, Harden led the NBA in scoring in each of his last three seasons with the Rockets. He was a threat to score 50-plus points on any given night, making every Rockets game a must-see for fans.

Right up until the pandemic hit, Harden was continuing to play an integral role in pushing the price of Rockets tickets up. In January 2020, the average cost of a Rockets ticket on the secondary market had increased 10% from the start of the season. Only six NBA teams saw a higher increase in ticket prices since the start of the 2019-20 season. Even though the Rockets had started to fall back toward the middle of the pack in the Western Conference, Harden helped to keep ticket prices high. 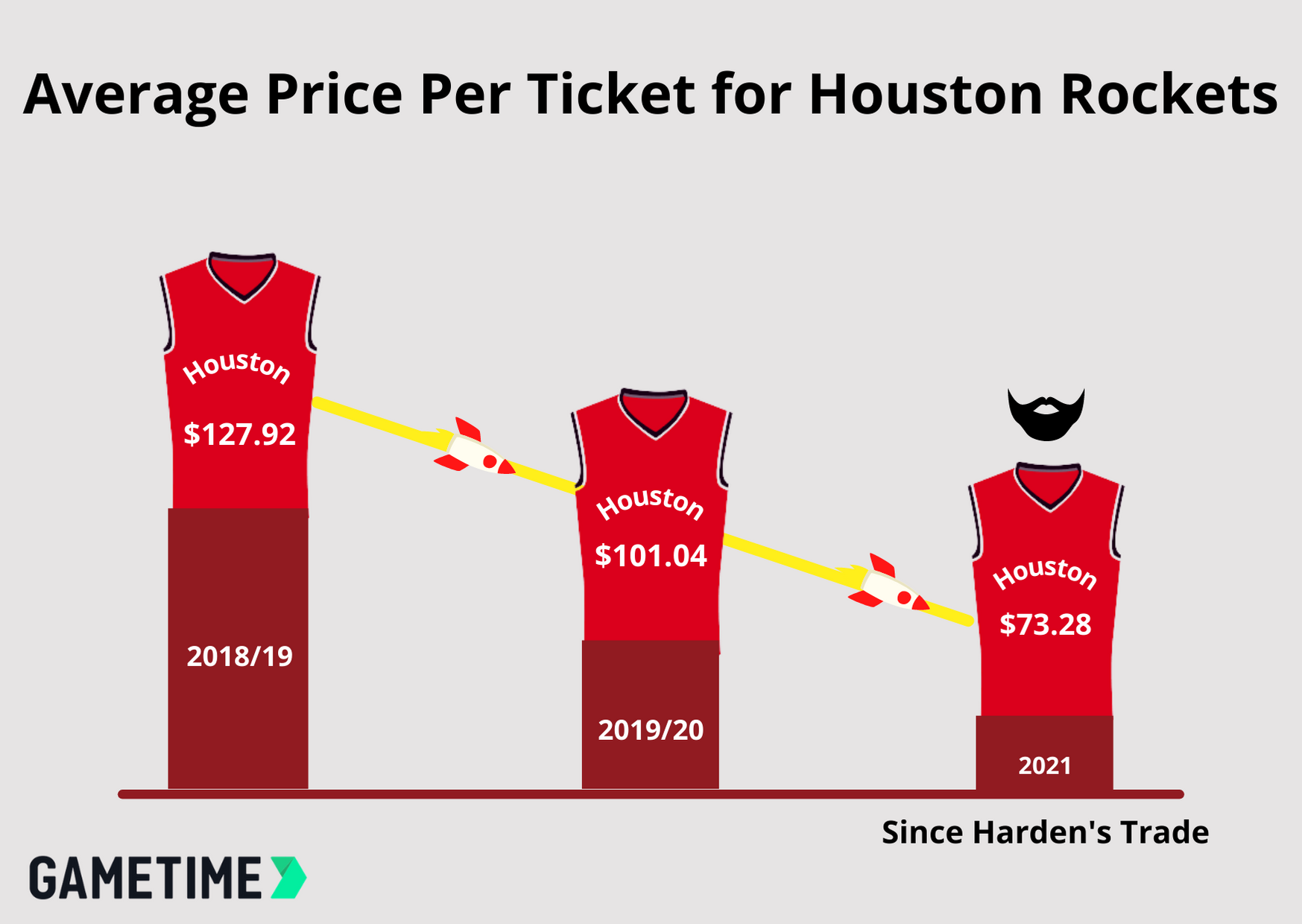 While it’s a small-sample-size, Harden’s exit has already had an impact on Houston’s ticket prices. Even with a strict limit on the number of tickets available because of the ongoing pandemic, there is an abundance of cheap Rockets tickets available on the secondary market. Some of Houston’s home games in February and March have tickets available in the $15-$35 range, which is almost unheard of for a top-flight NBA franchise under normal conditions. Needless to say, those low ticket prices have dropped the average cost down considerably, creating fan-friendly ticket prices inside an area that’s only being filled to 20% capacity.

Just a couple of years ago, games at the Toyota Center against high-profile opponents like the Lakers, Warriors, and Thunder had an average price in the neighborhood of $300. For most Rockets games moving forward, the most expensive tickets on the market barely surpass that amount. Of course, the only exception is Harden’s return to Houston with the Brooklyn Nets on March 3. The cheapest tickets available for that game are over $100, with many tickets listed above $300, proving that Harden remains the driving force in the cost of tickets to Rockets home games.

Rockets Ticket Prices in the Future

Once the Rockets and their fans adjust to life without Harden, there is a chance that ticket prices could start climbing back up. After all, Houston made the trade with the hopes of building for the future. The addition of Victor Oladipo, a two-time all-star, and Dante Exum in the Harden trade gives the Rockets two building blocks for the future. The presence of DeMarcus Cousins, Eric Gordon, John Wall, and Christian Wood will also help the Rockets remain competitive without Harden, putting them into a position to climb back to the top of the Western Conference sooner rather than later.

Of course, there’s no denying that Harden’s absence will cause ticket prices in Houston to plummet. For Rockets fans, now might be the perfect time to find a great deal. Admittedly, the show isn’t quite as good without Harden on the court. But the Rockets have enough quality players to make the reduced ticket prices well worth the cost of admission.