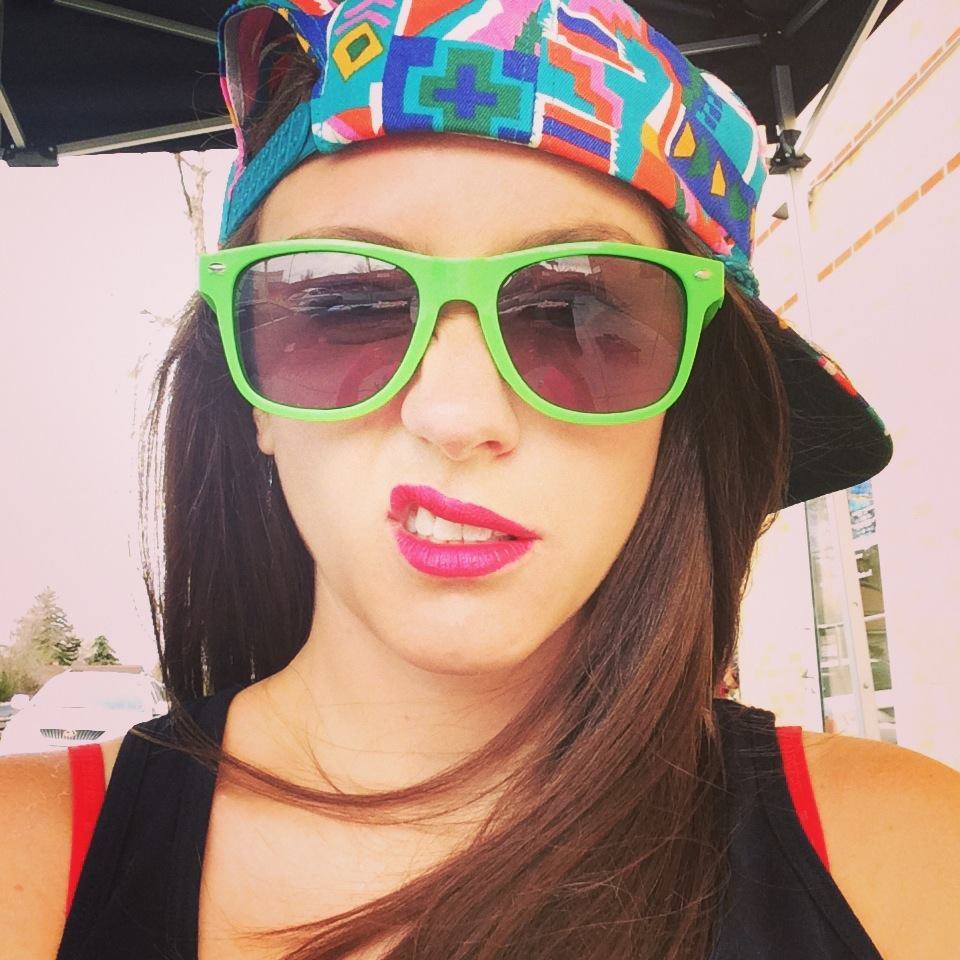 So, you’re thinking about going to the Super Bowl. Right on. These might be the most precious – and expensive – tickets you ever buy, so you’ll want to take extra care to make the right choices. When’s the best time to buy 49ers vs. Chiefs Super Bowl tickets? How do I know my tickets are the real deal? Big questions. We’ve got your answers. Read on to learn all about Super Bowl LIV and how to score tickets.

The business of the Super Bowl is unlike any other event of its kind thanks to the unique way tickets are issued and sold. In short: the general public cannot purchase tickets directly from the NFL.

Your best bet for getting face value Super Bowl tickets is to be a season ticket holder for any NFL team. About 75% of tickets are distributed directly to the teams, with the majority going to the two playing in the big game. Each team then sells their allotment—usually via lottery – to lucky season ticket holders, players’ families, employees, and others. The remaining 25% of tickets are controlled by the NFL and go to sponsors, media, and networks.

If you’re like most of us and missed the boat on season tickets, there’s still hope. While it’ll be tough to snag face value tickets, you can still find great seats through a secondary marketplace like Gametime. And that’s where we come in…

How to Buy Super Bowl Tickets

If you’re here, we’re assuming you’re not a lucky NFL lottery winner, which means you’ll likely be getting your tickets on the secondary market. Buying tickets from a secure reseller is 100% safe and secure, as long as you’re purchasing from a reputable source. Here are a few tips for how to structure your search:

Remember when we mentioned that Super Bowl tickets are a unique business? Well, that includes the way they're sold and allocated to fans. Up until a few weeks before the Super Bowl, tickets to the game are sold as "Zone Tickets," meaning you won't know your exact seat and section until closer to the event. We've written a separate blog post about how Super Bowl Zone seating works, so we suggest you check it out if you're buying tickets in advance.

When to Buy Super Bowl Tickets

Though trends vary from year to year, there are a few dependable peaks and valleys you can expect when it comes to Super Bowl ticket prices. Like most live events, the Super Bowl market tends to see prices drop as game day gets closer. Keep in mind that’s not always the case, though. There are myriad factors that can impact ticket prices, including weather, location, player injuries, and the matchup itself.

Face value Chiefs vs. 49ers Super Bowl tickets generally start at nearly $1,000 for nosebleeds—so you better be prepared to dole out some cash for these coveted seats. That said, if you know how the system works and plan accordingly, you just might come by an awesome deal on tickets. 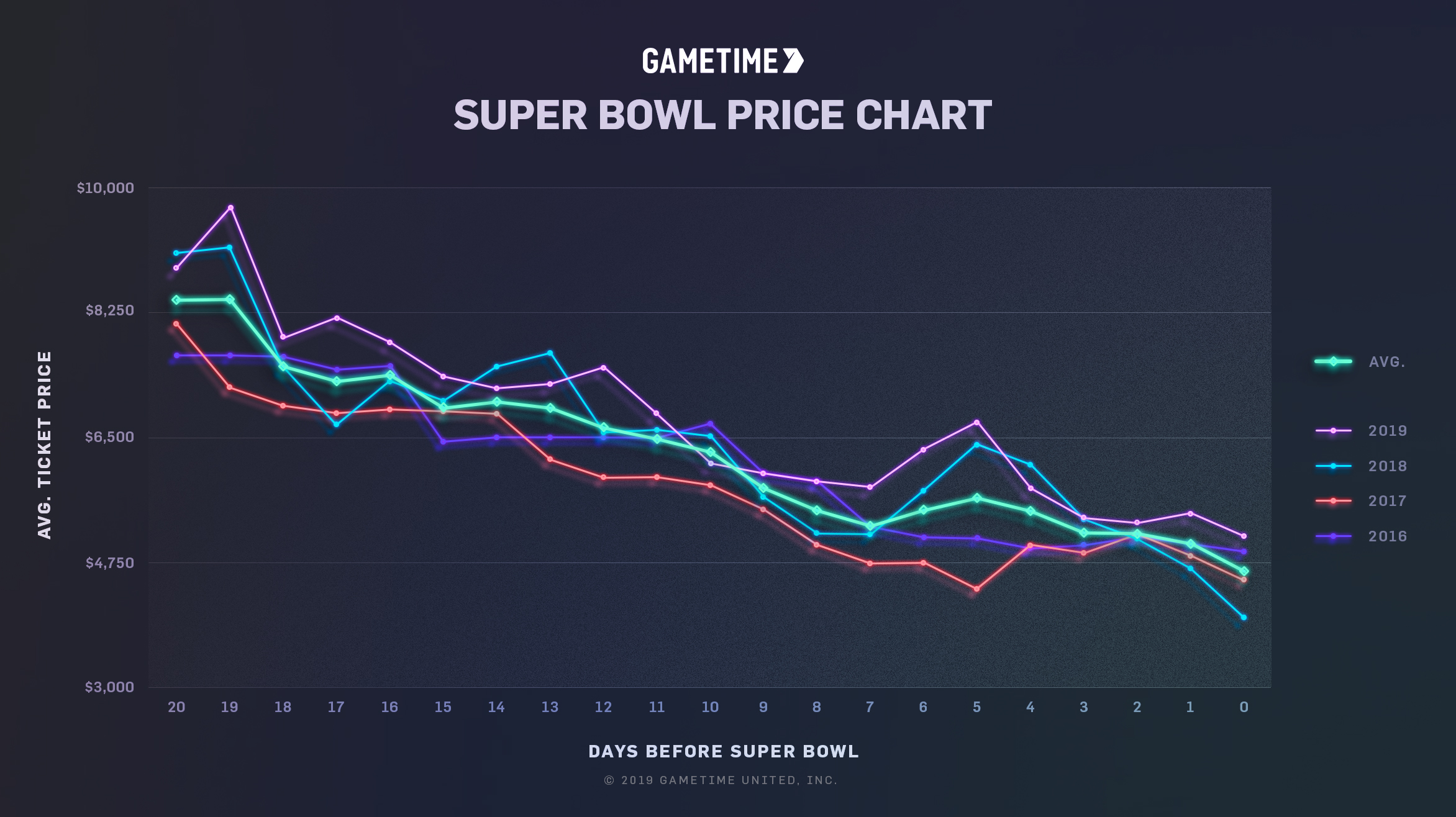 Historically, ticket prices increase right after the NFC and AFC championship games, as enthusiastic fans jump at the chance to see their favorite team compete in the Super Bowl. After the rush, prices tend to drop gradually over the following two weeks, usually hitting their lowest point in days prior to the game. Your best bet for cheap 49ers vs. Chiefs Super Bowl tickets – and we’re using the word “cheap” loosely here – is to wait until a day or two before the game. Of course, if you’re determined to go to the Super Bowl and you see a ticket within your price range, you may be wise to jump on it right away, since the market can be unpredictable.

If you’re tracking ticket prices in the Gametime mobile app, we recommend enabling All-In Pricing to view total costs including taxes and fees. Simply tap “My Tickets” in the app, click on your profile info at the top, and toggle All-In Pricing under Settings. By turning on this feature, you’ll see the full cost of tickets as you scroll through the app. (Note: you’ll need to create a Gametime account in order to adjust these settings.) 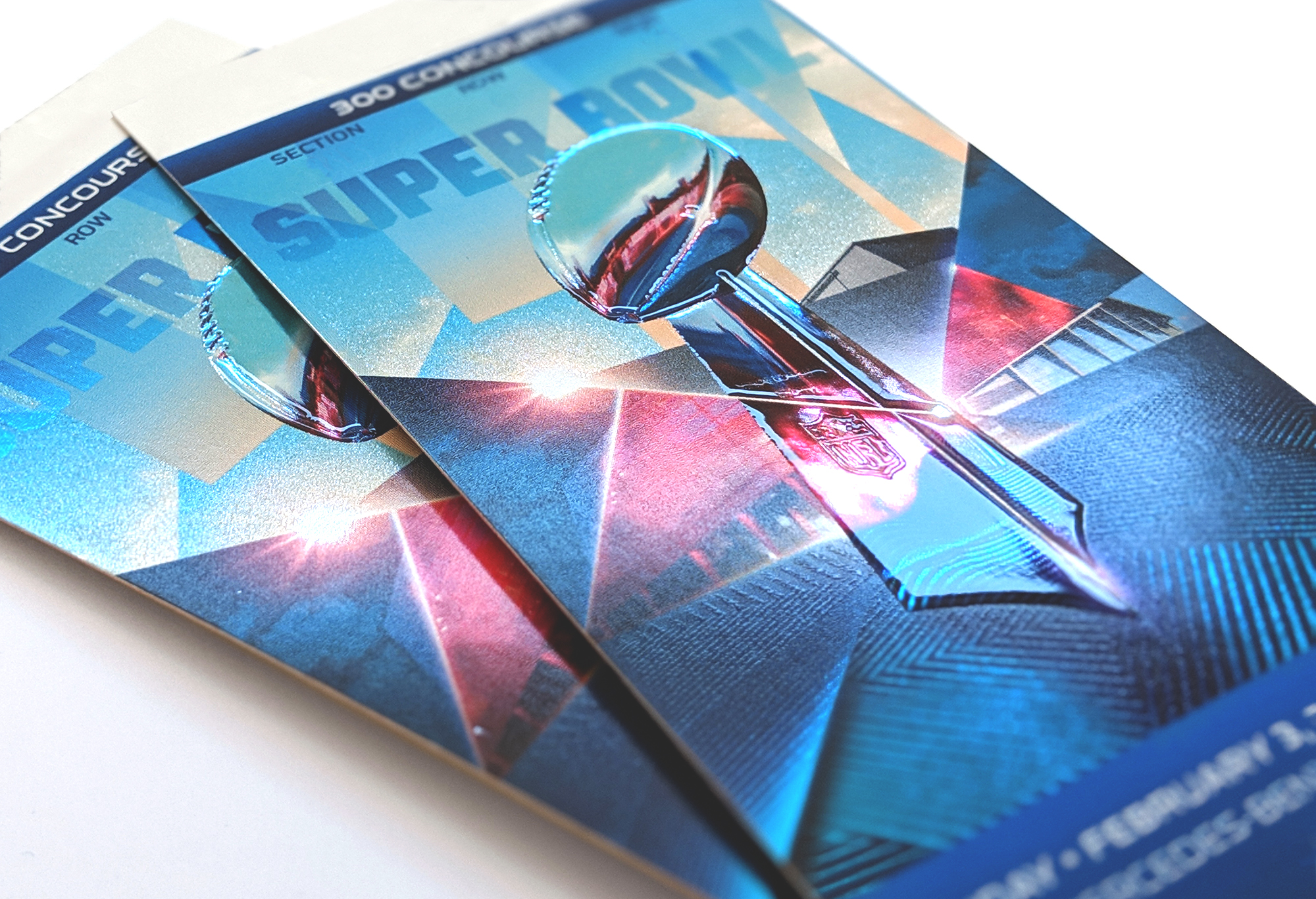 Although rare, Super Bowl ticket scams are both heartbreaking and wallet-draining. While it’s unlikely you’ll end up a victim of counterfeit tickets, it’s always a good idea to be prepared and stay knowledgeable.

The best way to avoid scams and know you’re purchasing legit Super Bowl tickets is to buy through a trusted platform like Gametime, and always use a secure payment method with protections, like a credit or debit card. Every ticket we sell is backed by our Gametime Guarantee, so you can rest assured your tickets are authentic.

As you consider your options, we recommend you get familiar with how to identify authentic Super Bowl tickets. Check out this year's Super Bowl ticket security features, so you know your tickets are the real deal:

Why Buy from Gametime?

If thinking about buying Super Bowl tickets is making your palms sweat a little, we get it. Spending two months' rent on one epic day can make anyone a little panicky. At Gametime, your peace of mind is our #1 priority, and we’re here to help you turn that nervous energy into pure exhilaration. If you're looking for a little extra reassurance, here are a few reasons to feel confident buying your tickets from Gametime: 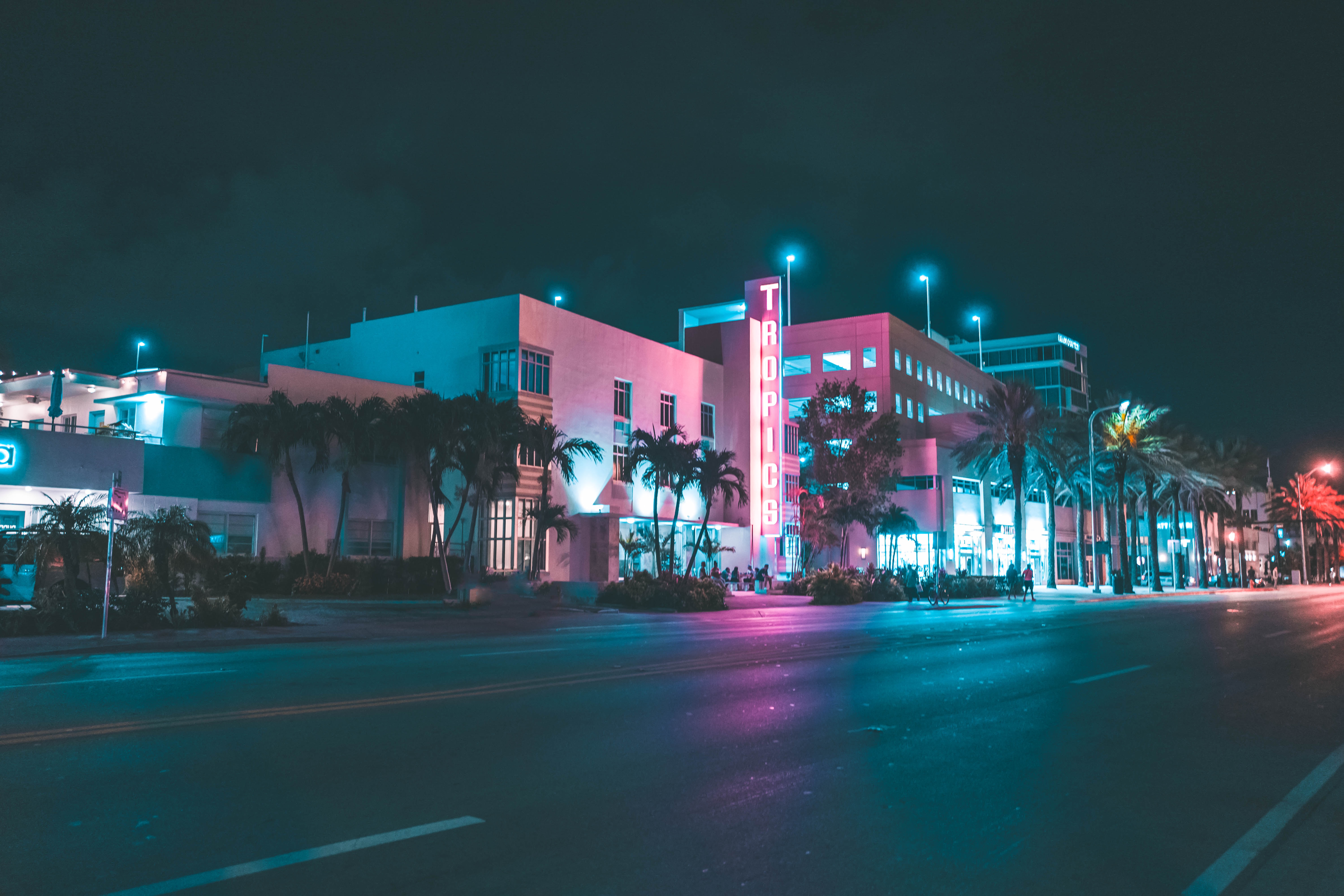 The 2020 Super Bowl will take place just north of Miami, Florida – home of the Dolphins, art deco, and Dwayne "The Rock" Johnson. This sprawling cosmopolitan city boasts balmy winters, world-class cuisine, and a dozen varieties of palm trees. The makings for a perfect host city for the Chiefs vs. 49ers Super Bowl.

In Miami, modern trends blend seamlessly with the region’s deep cultural roots, creating a vibrant, energetic melting pot that welcomes visitors from all over the world. Whether you’re a foodie, sports fanatic, art buff, or sun worshiper, you’ll find your niche in Miami's diverse urban landscape.

Fortunately, the city is no stranger to marquee sporting events. Miami hosts the annual Orange Bowl and has hosted the Super Bowl a whopping ten times – most recently for Super Bowl XLI in 2007 and Super BowlXLIV in 2010. They know what they're doing in The Magic City, and we're ready for them to bring it.

Super Bowl LIV will be held at Hard Rock Stadium just north of downtown Miami. The stadium isn't as new as some others in the league — it opened in 1987 — but it sure has history. It's gone by a myriad of names over the years, taking on its most recent moniker in 2016. Seating more than 65,000 people, the stadium acts as home turf for the Miami Dolphins and the University of Miami Hurricanes.

Despite the fact that the stadium is more than 30 years old, it has been updated over the years and boasts several state-of-the-art features. The newly-renovated space offers several luxury lounges and clubs, most notably the 72 Club "Living Room" boxes at the 35-yard line, with huge comfy leather seats and premium service. (Google it!) There's also a stadium-wide exhibition called "Art Unexpected," which includes nearly 40 pieces of unique art designed by artists from across the globe.

Five of Miami's 10 Super Bowl games have been hosted at Hard Rock Stadium. And fun fact: a kickoff has been returned for a touchdown in every Super Bowl played at the stadium except the 2010 game. Fingers crossed for that kind of excitement in 2020! For more info about Hard Rock Stadium – including policies, dining options, and facilities – check out the stadium’s official website.

Pregame at the Super Bowl is always buzzing with energy and excitement, as thousands of people descend upon the stadium grounds – many of whom aren’t even going to the game but just want to get rowdy alongside their fellow fans. Tailgating at Hard Rock Stadium is allowed in all parking lots before the game. Keep in mind that your car is permitted to take up only one parking space, and your tailgating equipment – including tents, grills, and your intricately carved ice luge – may not extend beyond the area behind your vehicle. And sadly, no kegs allowed. For other tailgating policies, visit the Hard Rock Stadium website.

Want to elevate your pregame experience? Grab tickets to the Players Tailgate, where you can rub elbows with NFL players, dine on food prepared by celebrity chefs, and generally bask in Super Bowl extravagance. A Players Tailgate ticket can be yours for just $875. 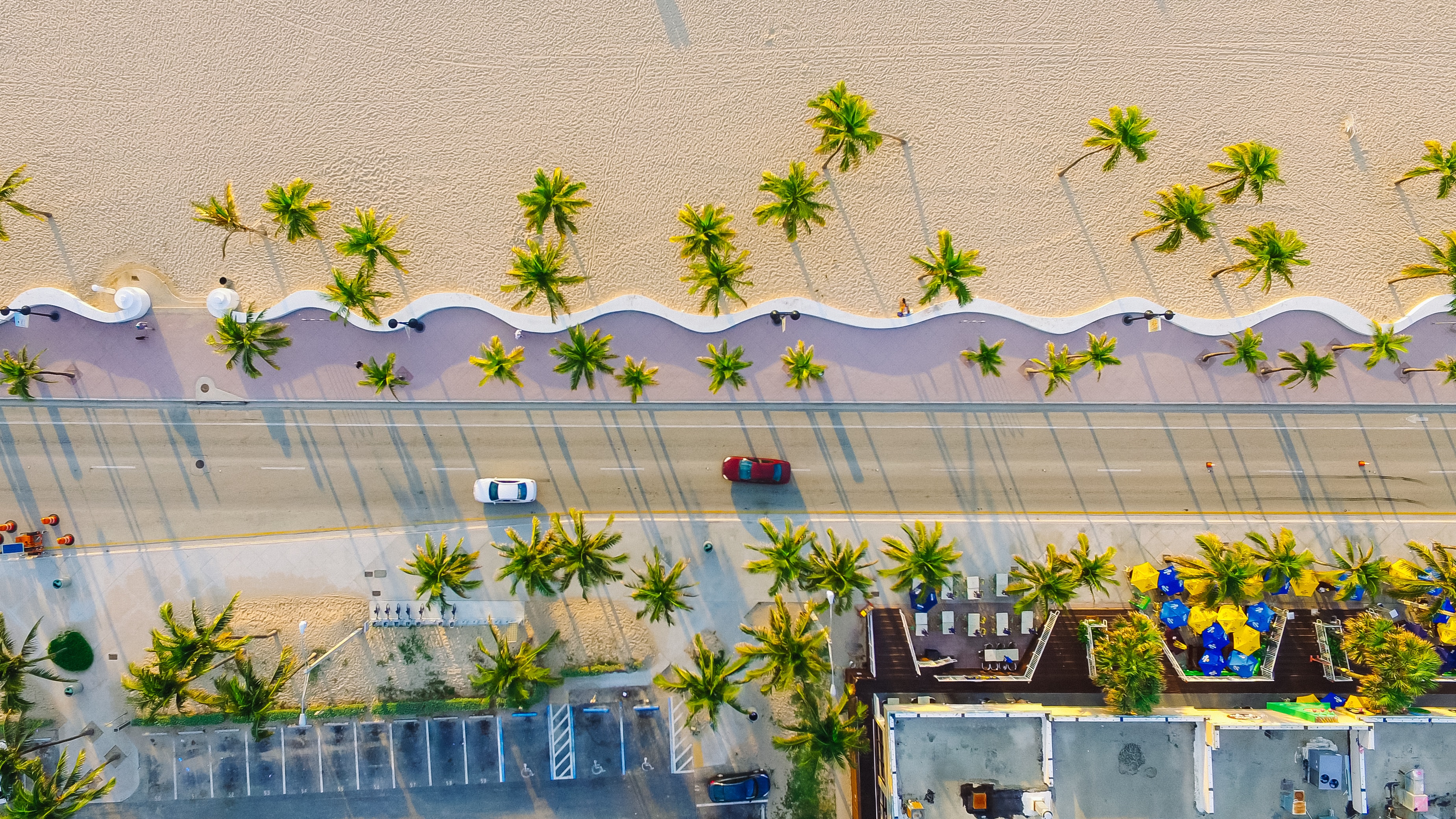 Hard Rock Stadium is located in Miami Gardens, Florida – just north of downtown Miami. For transportation info and parking passes, visit the Hard Rock Stadium website. Here are your best options for getting to the Super Bowl:

With nearly $500 million in renovations in recent years, Hard Rock Stadium has made some major upgrades – and its culinary experience has benefitted significantly. There are tons of unique dining options throughout the stadium, including artisanal and craft beer outposts, classic stadium fare, and on-trend gourmet options. Here are a few of our favorite spots to eat and drink at the Super Bowl:

We’re happy to help! Or talk Super Bowl predictions. Or commiserate about the demise of your fantasy team. Reach out to our dedicated customer support team at (888) 660-7992 between - PST.