Who could have guessed that when we gathered for the Super Bowl on February 2, 2020, that we were just a few weeks away from the entire world turning upside down? Obviously, the ongoing COVID-19 pandemic has changed everything in our world in one way or another. We can say with certainty that the Super Bowl LV, which is scheduled for February 21, 2021, at Raymond James Stadium in Tampa will be like no other Super Bowl in modern times. Frankly, we’re still hoping that the game is played at all.

Assuming the game will go ahead, even the commercials for the Super Bowl might be different this year. Since the pandemic has ravaged the economy, the economics being the purchase of Super Bowl ads has changed as well. Let’s take a closer look at the prices for this year’s Super Bowl commercials? Have they gone up, gone down, or stayed the same compared to last year?

The cost for a commercial at Super Bowl LIV between the Kansas City Chiefs and San Francisco 49ers was $5.6 million, which was up from $5.3 million the previous year. Of course, that’s just the average price of over 40 ads that Fox aired during the game. Each company that wants a Super Bowl ad must negotiate a deal with the network that’s broadcasting the game. Some companies get better deals than others based on several factors, including their history of advertising during the Super Bowl.

According to reports, the cost of a 30-second ad for Super Bowl LV is holding steady at around $5.6 million. Of course, the game aired on Fox last year and will be broadcast by CBS this year, putting Viacom in charge of selling advertisements. However, CBS isn’t planning a price hike for Super Bowl LV. The average cost is likely to be around $5.6 million, plus an additional $200,000 to air the commercial on the game’s online stream.

The pandemic is without question the biggest reason why the cost for a Super Bowl commercial is remaining stagnant. Viacom understands the fact that marketers are reducing the amount they’re able to spend on advertising because of the pandemic. This is particularly true in the retail industry, the travel industry, and movie studios. Retailers have been crushed by the pandemic, while movie studios have been hesitant to produce or release blockbuster movies. We’ll likely see fewer commercials for retail stores, anything related to travel, and upcoming movie releases during the upcoming Super Bowl. 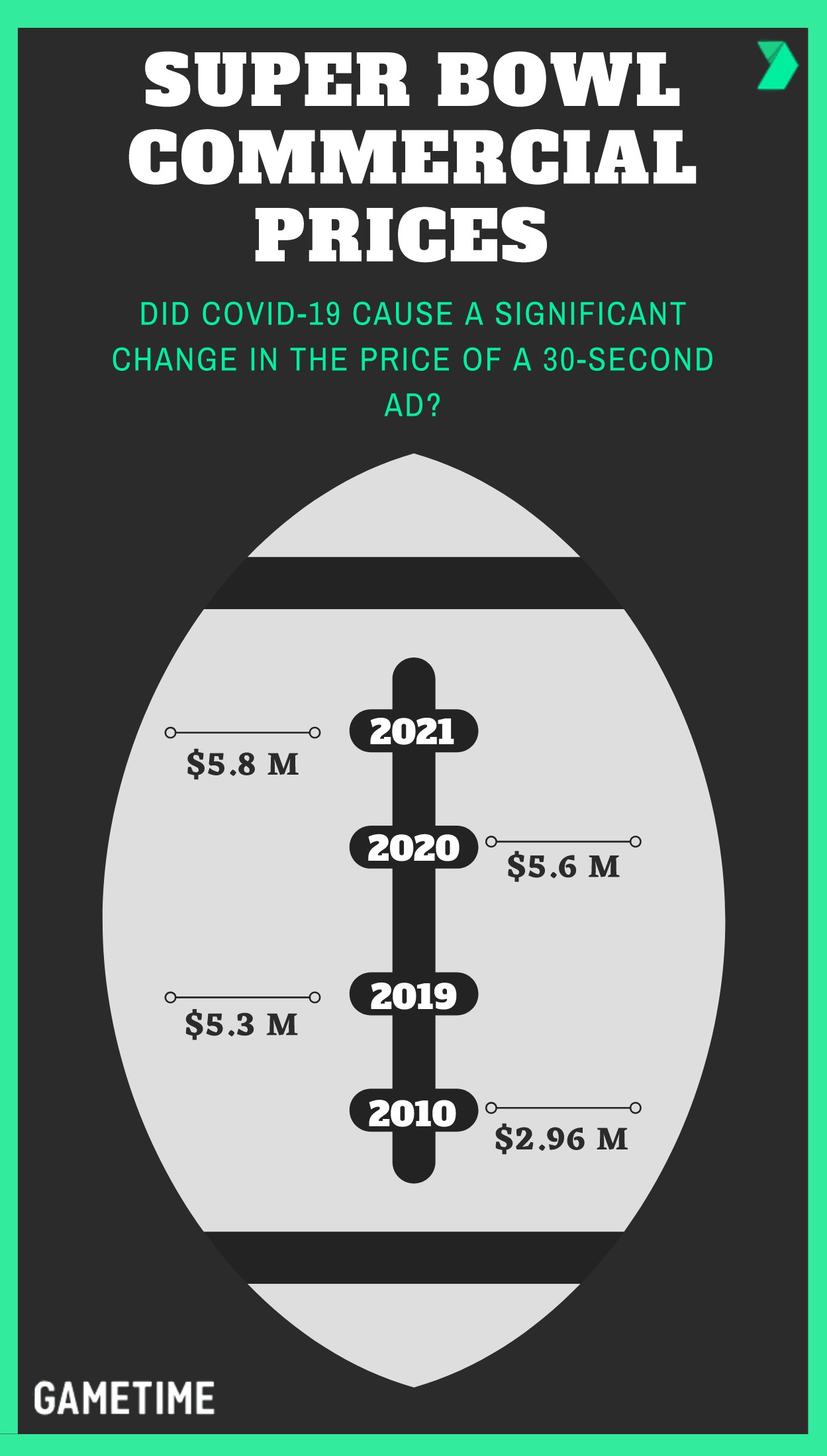 Another factor that could end up impacting the average price of Super Bowl commercials this year is the fact that more companies are waiting to buy 30-second spots. There is still some level of uncertainty that the NFL will be able to finish the season and get to the Super Bowl. After all, the coronavirus is heading into the holiday season, and it will likely be long after February 7 when any vaccines are widely available to the American public.

At the moment, some marketers are keen to wait until the last few weeks before the game before committing to an ad. By then, executives should have more confidence that the game will go ahead and that the economy will bounce back by the second or third quarter of 2021 when vaccines are more readily available. This is in sharp contrast to past Super Bowls when a majority of the 30-second spots were sold months ahead of the game.

Meanwhile, some companies that have already purchased advertising time during the Super Bowl have also negotiated clauses that allow them to get a refund if the game is canceled. Again, each company that wants a Super Bowl ad will negotiate its own contract with the game’s broadcaster. However, the upcoming Super Bowl is the first one in which clauses to back out of the contract have been included.

In the meantime, while we wait to find out if the upcoming Super Bowl will go ahead, here are the top 10 funniest Super Bowl ads:

In a way, it’s not surprising to see the cost of a Super Bowl commercial remain the same. With the crowd likely limited and large gatherings unwise, there is likely to be more TVs tuned into the game. However, the economic downturn has reduced the number of companies that are financially secure enough to spend $5.6 million on a 30-second ad. Ultimately, those two factors are likely to cancel each other out, keeping the price of a Super Bowl ad the same in 2021 as it was in 2020.