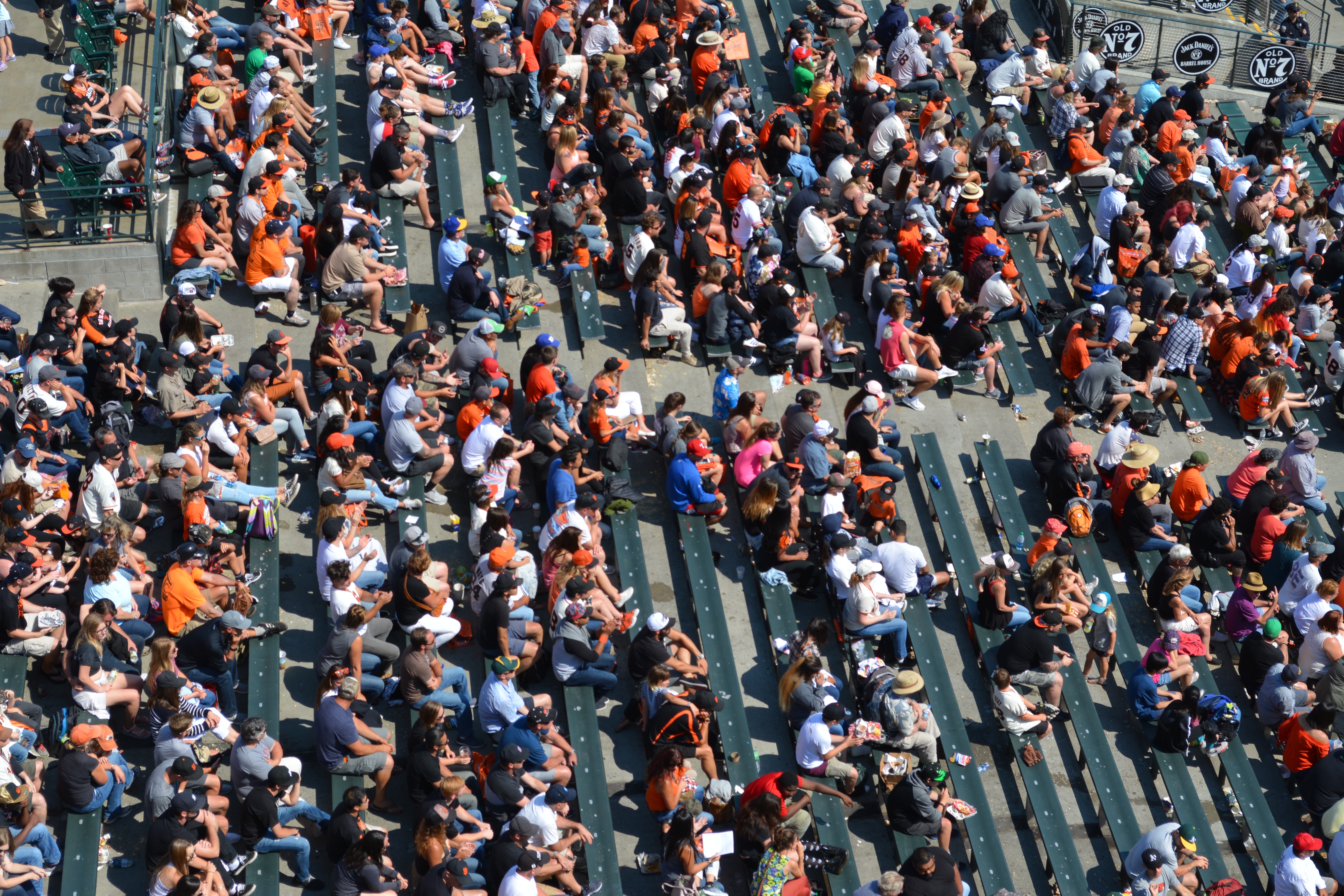 The Los Angeles Dodgers are on pace to challenge the most wins ever in a Major League Baseball regular season. They’ve been hotter than an Inland Empire summer and despite a disabled list longer than the evening commute on the 405, they’ve continued their torrid pace toward history. Surprisingly, their incredible performance on the diamond has not translated into exorbitant ticket prices.

Tickets to Dodgers Stadium in 2017 are averaging a very affordable $27 per seat which stands four dollars below the overall MLB average ticket price of $31. Subsequently, the great affordability of tickets coupled with the record winning pace has catapulted the Dodgers to the top-selling MLB team on Gametime overall. Dodgers sales have followed the performance curve of the team, outgrossing the #2 selling San Francisco Giants by 48%.

Relative to their other division leading peers the Dodgers are a dramatically less expensive ticket, as much as 148% less when compared to the Boston Red Sox, who at $67 per ticket are the most expensive in baseball on average. The Red Sox rank a mediocre 18th on the Gametime MLB Value Index due to this fact. While historic Fenway is iconic and the Sox are back atop the AL East, it’s still a steep price to watch them play relative to the rest of the league.

Similarly, the Chicago Cubs who rank just above the Red Sox at #17 come in at $61, double the MLB average ticket price. Naturally, they are one of the hottest tickets in the game as their long-awaited world championship finally became reality in 2016. But like the Red Sox, an extremely pricey ticket for regular season games for a team that just recently ascended to a division leader.

The Gametime MLB Ticket Value Index ranks the overall secondary market ticket values of each team. To define overall value the index considers factors such as average per game ticket price (as sold thru Gametime), overall winning percentage, current standings and postseason potential along with intangibles like marquee players or unique stadium experiences. The Gametime app is designed to display the best available values to any event it offers and caters to a cost-conscious fan most often. Over 70% of MLB transactions on Gametime happen within seven days prior to the game with 47% taking place on the day of game itself reflecting the market at its most price competitive.

Gametime analyzed its average 2017 selling prices for all 30 MLB teams and coupled that with their overall performance to uncover some interesting data. The data reflects a view through of what primarily Millennial fans (over 70% of Gametime user base) have been spending for tickets throughout the 2017 season on Gametime. Reasonable expectation would have the worst performing teams carry the least expensive ticket prices and similarly, the best, to have steep demand and higher prices. However, as with the Dodgers, our best and worst values reveal some exciting examples to the contrary.

Following the Dodgers as best value in MLB are their neighbors to the south, the Los Angeles Angels. Led by reigning AL MVP Mike Trout, the Angels have been surging in the second half, making their move for a wild card playoff spot. Tickets at Angel Stadium have stayed the least expensive in the league this season at an average of just $21. With tickets routinely selling for just $1 sales volume has spiked, driving the Angels to the fourth highest grossing team of the season and a year over year increase of over 285%, the highest in baseball. 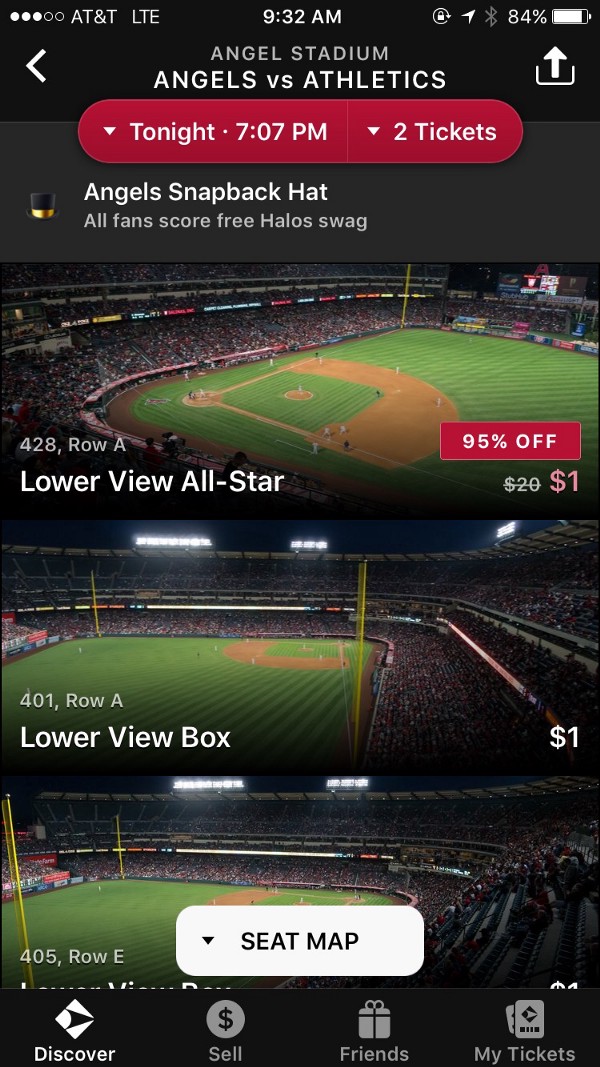 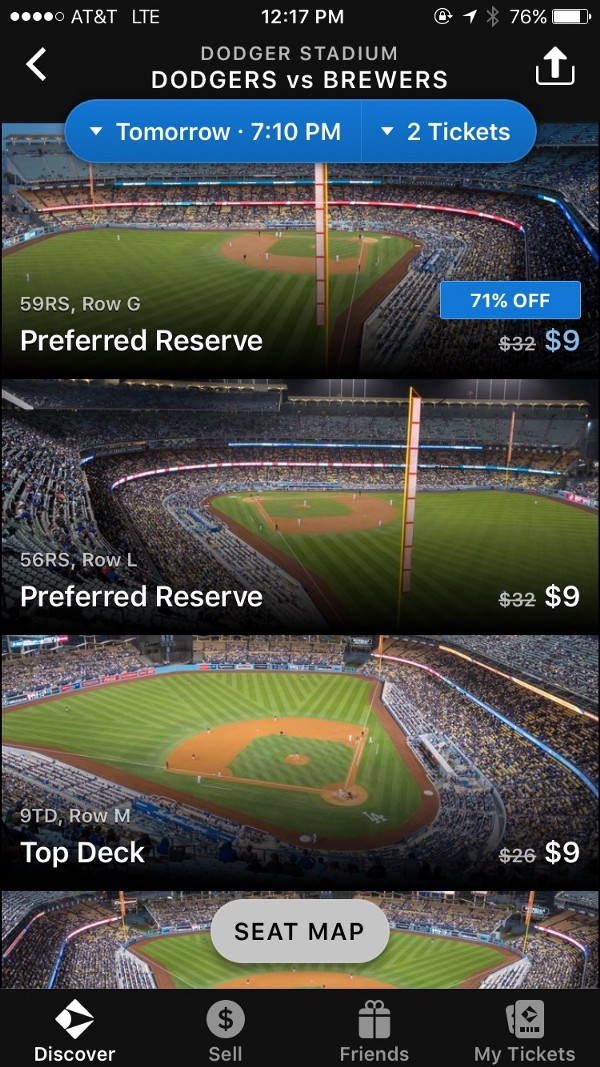 The remainder of the top five include the NL East leading Washington Nationals ($29) who sport the second best record in the NL, the St. Louis Cardinals ($23) and the Miami Marlins ($26), who despite a .500 record feature the most exciting player in the game right now in Giancarlo Stanton.

Bringing up the backend of the index as the Worst Ticket Value in the MLB would be the San Diego Padres. Currently sitting at 57–73 and in the depths of the NL West, Padres fans are still spending a surprising average of $41 per ticket to see games at Petco Park this season. While the game day experience is certainly enjoyable in sunny and temperate San Diego, the market prices for games certainly are not in line with the team’s performance this season.

Joining the Padres among the worst values in MLB are the Tampa Bay Rays ($47) who despite a late-season run at a wild card berth, still remain under .500 and in fourth place of the NL East. Tropicana Field, which opened in 1990, is the eight oldest park in the league.

Rounding out the bottom five values include the Oakland A’s ($33), Philadelphia Phillies ($29) and the Chicago White Sox ($25). All three teams share the common bond of well below .500 records along with residing in the basements of their respective divisions. 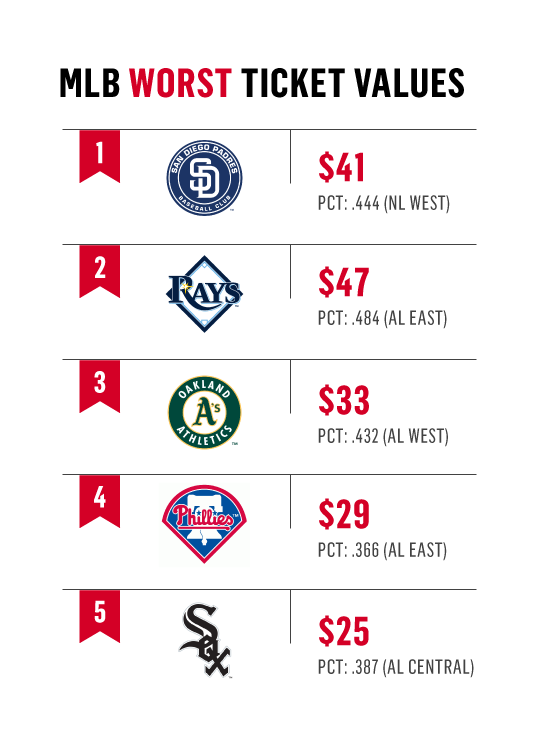 The remainder of the league slots in below. Let the debate begin! 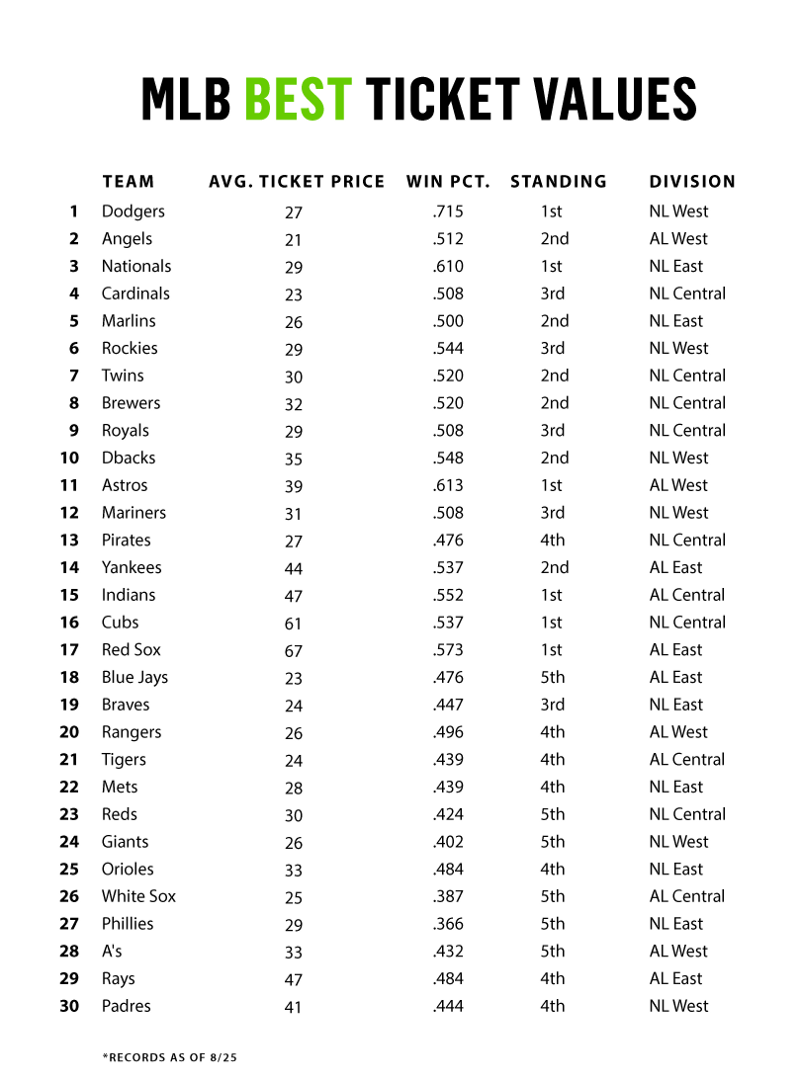